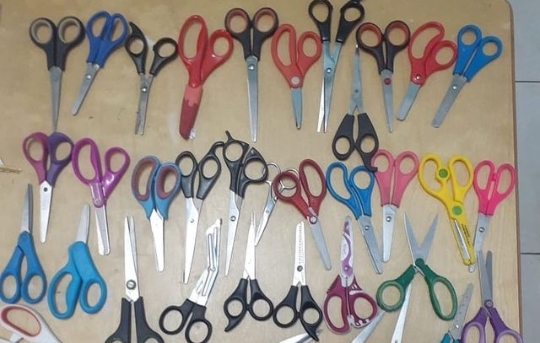 Dozens of scissors and knives seized by police at high school in St. Catherine

Police of the St. Catherine South division have seized dozens of knives and scissors while conducting a search of a high school within the division this week.

In a media release on Wednesday (March 30), the Jamaica Constabulary Force (JCF) stated that among the items seized was the Jamaican dessert ‘Coconut Drops’, however, these were infused with Marijuana (Ganja).

According to the JCF, two students were arrested and charged for the procession of marijuana.

The St. Catherine South Police have ramped up surveillance on schools within the division as a part of the violence interruption strategy to prevent violent encounters among students.

This comes after the Minister of Education, Fayval Williams in a virtual press briefing on Friday (March 25) stated that the Ministry of Education (MOE) is to conduct a full audit of metal detectors in schools.

Williams’s announcement follows several incidents of student-on-student violence involving the use of offensive weapons since the full resumption of face-to-face classes earlier this month.

The minister on Friday noted that approximately 36 schools were selected for walk-through metal detectors before the disruption caused by the COVID-19 pandemic.