Mark Golding: “I finally met with the PM”

Leader of Opposition Mark Golding took to his social media platforms  to let Jamaicans know that he had finally met with Prime Minister Holness on Friday (September 3).

“I finally met with the PM to discuss the COVID-19 crisis,” Golding said.

Golding added that the government has his full support in promoting the National Vaccination Programme and that it’s all hands on deck to secure the future of the Jamaican people.

“I will continue to play my part in promoting the National Vaccination Programme so that Jamaica can emerge from the vice grip of the pandemic,” he added. 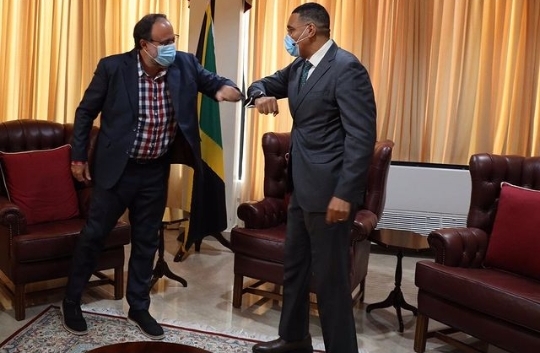 In a media release on Monday (August 30) Golding told the Jamaican people that he had yet to hear back from the PM despite sending him a letter.

In his letter to the PM, Golding suggested an immediate summit to address the recent surge in COVID-19 cases and the shortages of Medical Oxygen in several of the nation’s health facilities.

PM Holness had previously stated that he would be seeking consultation with the Opposition regarding the COVID-19 crisis.