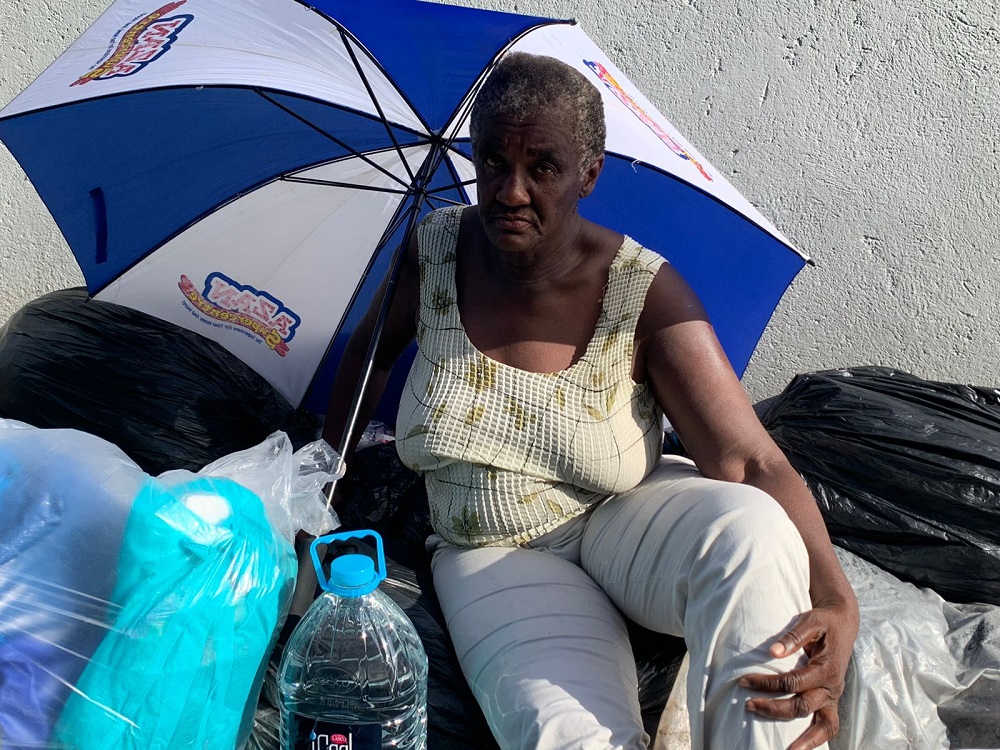 One of the faces of homelessness: Sharon Hamilton has been on the streets for over two decades

Meet Sharon Hamilton, she is one of the many faces of homelessness across the city.

The Den caught up with Hamilton who had built a makeshift bed along the perimeter wall of an apartment complex on West Avenue near the intersection with Central Avenue.

As cars sped by, Hamilton, slept comfortably in the midday sun atop over 12 , counted bags, stuffed with empty bottles and bits of clothing.

Hamilton told The Den that she’d been at the location for close to 12 weeks, noting that she had been warned to leave but was taking her chances.

According to Hamilton, she’d been on the streets since 1982.

However, she had done five year stints at the Hosanna Home, as well as, some other shelters across the city located in the downtown core.

When asked, how old she was, Hamilton shared that she believed that she was about 105 years-old.

Though it appears that Hamilton has some mental challenges, she was able to share that she had attended the Alpha Primary School.

She recalled names such as: Sister Alma, Sister June and Sister Bernadette, adding that she had also attended Holy Trinity and Fitz Henley Commercial.

Hamilton, who is clearly in need of a more permanent dwelling, shared that she had more immediate needs, including water among other things.

After responding to her most basic needs, with a promise to return The Den reporter left the location.

The Den made several calls to the Poor Relief Department attached to the Kingston and St Andrew Municipal Corporation (KSAMC) in hopes of ascertaining help for Hamilton but were unsuccessful.

Calls made to the department were answered, however, the representative was unable to state what individuals should do when street persons are observed in obvious danger.

The representative, who noted that the programme’s manager was busy, also could not provide any clear guidance on the number of shelters under the remit of the KSAMC.

The Den was able to glean that there were at least two shelters that were funded by the KSAMC, including a night shelter, which provided a safe space for the homeless at night.

We also reached out to Hosanna Home, located on Mannings Hill Road, and was told that it is a nursing home.

The representative at Hosanna Home was unable to say if the establishment had ever accepted homeless individuals.

Under current legislation the The Board of Supervision is a statutory body  under the portfolio of the Ministry of Local Government and Rural Development that has responsibility for the Homeless and Street People Programme.