The concern arises as many parents cite the large number of new coronavirus cases recorded in recent days, coupled with new infections at the school, that parents say school administrators have been tight lipped about.

According to one parent, who asked that her identity be withheld, the school took three days to advise them that a student had tested positive for COVID-19. 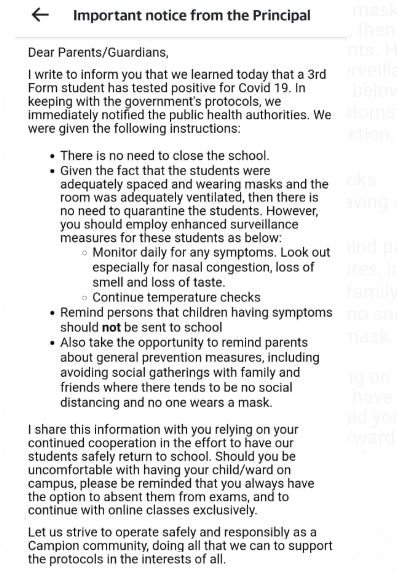 “My daughter just told me they are now up to 7 cases, they are trying to keep it quiet,” the mother told The Den.

The mother further said that given the rise in cases not just at the school, but in the parish of St. Andrew, she would have hoped that school administrators would have made some provisions in order to conduct exams and assessments online.

An e-mail sent out by the high school’s principal, Grace Baston, dated February 9, 2021, notes that, “the school does not have the capacity to conduct online exams in a way that would ensure valid grades”.

“Reliable exams require special proctoring  software, as well as, each student having a web camera and a mic at home,” read the e-mail.

“We are very capable of carrying out formative assessment online and have been doing that for years. However we recognize limitations of this mode of assessment, and are convinced that in order to ensure the authenticity of students’ work, we need to proctor or supervise our examinations in person, ” added Baston in an e-mail.

Of concern to parents of students uncomfortable with the school’s position regarding exams, is that the only option being presented to them is the “student be marked absent for the exams”.

“Parents who are uncomfortable with having their children at school for their examinations have the option to keep them at home. The students will be marked absent for exams, once the school receives written communication from parents indicating  that this is their choice,” reads the e-mail explaining the school’s position. 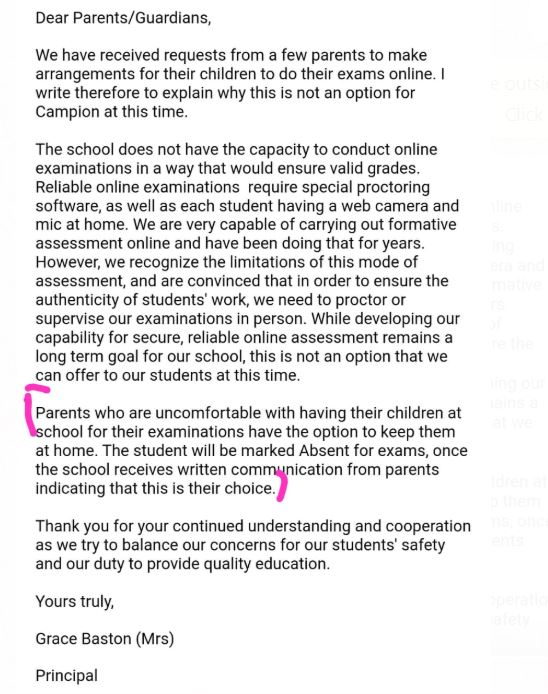 A male parent told The Den that he is alarmed by the school’s position which seems very inflexible.

“To be honest, I am not comfortable with the Principal’s approach and it is as though only two options exists, when there are in fact many more options that should be discussed and explored, ” said the father of a student in grade 9.

“She has stopped  talking to parents and has this take it or leave it attitude,” added another.

The Den reached out to the school’s principal twice and were told in one instance that she was in a meeting and, in another that she was not in office.