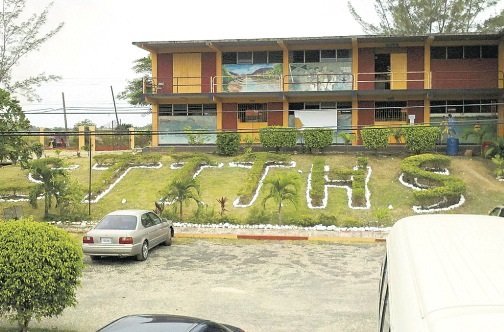 A group of teachers at the St Thomas Technical High School are concerned that the institution’s refusal to let them work from home is putting their health at risk.

One teacher who spoke to The Den under the condition of anonymity revealed that despite the government’s recent work-from-home order for public sector employees, which began on Thursday (March 4) teachers at the institution are still being asked to physically report to work.

According to the teacher, while she can understand that those teaching the exam grades would be required to attend physically, she can’t understand why others teaching lower grades are mandated to attend.

So why are teachers required to physically attend school?

According to the teacher, the school’s principal told them that one of the reasons why educators are required to attend physically is because of the issue of accountability.

“She is saying that some teachers are not going to class. But you can sit right in the staff room and decide not to go. I’ve seen it over and over. Teachers have been at school and decided that they are just not going,” the teacher said.

“But they need to find some other way to ensure accountability. Why do I need to travel to school – taking public transport at that- to teach a virtual class. Why? You have almost 60 people coming in and we wonder why COVID-19 is spreading,” added another teacher, who told The Den that there has been a seismic shift in management, since the departure of the former principal.

The teacher further pointed out that productivity is hampered on the school compound due to the poor internet connectivity exacerbated by the large number of teachers using the network to conduct classes from the location.

“ I was at school two days before midterms and there was no internet connectivity and all we did was just sit there for Monday and Tuesday no teaching was done unless the teacher decided that look I am going to use my data to have classes,” said the teacher.

“ This is my problem, everybody just sits there in fear of the consequences that may result if you speak up. And when you put pressure on her she (the principal) tells you absolute nonsense such as ‘the board said’. But when I called the JTA they said ‘nothing like that’,” added the teacher.

The teacher further lamented that going to school physically is not only unnecessary but puts teachers at risk of contracting the deadly virus that has killed 436 Jamaicans to date.

According to the teacher, at least three staff members at the institution have tested positive for COVID-19.

“Two teachers and one person from the bursary department have tested positive for COVID-19,” the teacher revealed .

To make matters worse, the teacher notes that the principal has been disclosing the identity of the teachers who have COVID-19, however refuses to do so for other staff.

“When the first member of staff had COVID, she came and she gave us all sorts of details, the second teacher had it she did the same thing. She disclosed things like, so and so has COVID-19 you should text him and, you know he’s not doing so well because he is an asthmatic; in addition, he’s going through some other personal problems that I am not at liberty to say. Yet still, when someone in the bursary department tested positive, we were told we couldn’t know the name of the individual,” the teacher said.

“What’s the difference, why can’t you state the name of the administrative staff member that has it? They later said persons who were in close contact including the principal and the VP should get tested,” added the teacher.

According to another teacher, who notes that while he is required to be at school, says he can attest to the fact that the school’s posture, in general, has not been cooperative as it relates to fighting the spread of the virus.

“Emphasis is placed on unruly party patrons who break the rules, but right here in the schools, leaders and administrators are doing the same thing,” he said.

“It puts me at risk, you would have to see the size of the staffroom to understand that it is best for less people to come. I don’t know, I think they just want us here so they don’t lose money. School like anything else is a business, tuck shop, cleaning staff and other things only function based on us being physically here, he added.

The Den reached out to the Principal at the institution, Kerry-Ann Coombs, who originally said that her staff were on a flexi-work week arrangement.

However, when pressed to state what a flexi work week arrangement meant and if it was in line with the latest government orders, she retracted her statement, noting that she would not be providing any further comment on the matter.