The Meteorological Service of Jamaica has extended its flash flood warning to 5:00 p.m. on Monday (October 26) as Tropical Storm Zeta has continued to strengthen but remains stationary.

According to the National Hurricane Centre, Tropical Storm Zeta was located near latitude 18.0 North, longitude 83.6 West with maximum sustained winds at near 50 mph (85 km/h).

Jamaica is currently experiencing heavy rains and winds which the Met Service has described as a result of a trough of low Pressure west of Jamaica which continues to generate unstable weather conditions.

Additionally, the newly form Tropical Storm Zeta, although not a direct threat to Jamaica, has increased the poor weather conditions.

The latest satellite imagery shows continued periods of showers and thunderstorms, which has been heavy at times and is expected to last into Monday morning.

Mostly cloudy conditions with periods of showers and thunderstorms, are expected for Monday.

The heavy rains and thunderstorms have wreaked havoc across the island, with reports of landslides and blocked roads in just about every parish.

There have been several dramatic videos which have surfaced online showing cars being swept away by heavy flood waters, in addition mourners braving hip high waters to bury their dead. 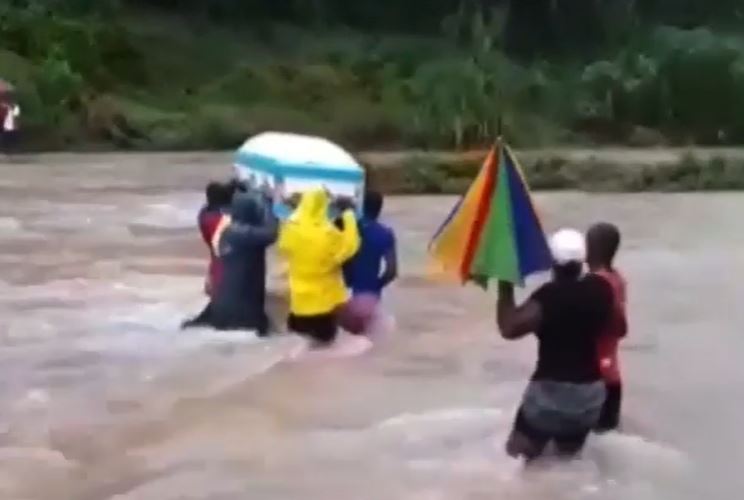 As conditions continue to worsen, motorists and pedestrians are being warned not to attempt to cross flooded roadways or other low-lying areas as strong currents are likely.

Residents in low-lying areas should be on the alert for rising waters and be ready to move quickly to higher ground.