US Ambassador slammed on Twitter for ‘meddling’ in Jamaica-China affairs

Without the blue tick, signifying that it is the verified account of a US diplomat, it would be hard to believe that such a high ranking official would be caught up in a war of words on popular social media platform, Twitter.

U.S. Ambassador to Jamaica, Donald R. Tapia, was on Tuesday (October 27) embroiled in a vicious screaming match on Twitter as he sought to clarify and defend comments he allegedly made encouraging the Jamaican government to exercise caution in the acquisition of 5G technology from Chinese firms.

In commenting on the article one Twitter user wrote, “So what he is now? The Governor of Jamaica” seemingly referring to Ambassador Tapia.

The comment was followed by a series of tweets by Jamaican users telling the ambassador to “mind his own business”, with many noting that Jamaica, while not entirely independent, should be able to negotiate with Chinese firms if local lawmakers see it appropriate.

However, Ambassador Tapia, didn’t let the snarky comments slide, instead he too rolled up his sleeves and typed up a few jabs of his own in the comment section.

“You have a prime minister not a governor. You don’t know who runs your own country,” asked Tapia as he responded to the initial comment.

“Anyone afraid to tell Tapia to mind his own business? Or are they afraid lose their visas? tweeted another user, to which a clearly salty Tapia responded, “You must have been turned down, sounds like your angry”.

However, Tapia’s vitriol wasn’t just spewed at Twitter users in the comment section, the ambassador also took a jab at Nationwide.

“Where is the full tape? Conveniently lost!” tweeted Tapia, who was sure to tag the NNN boss Cliff Hughes.

Where is the full tape? Conveniently lost! @cliffnationwide

The drama on Twitter was far from over, as Tapia made it his point of duty to respond to the majority of the comments. 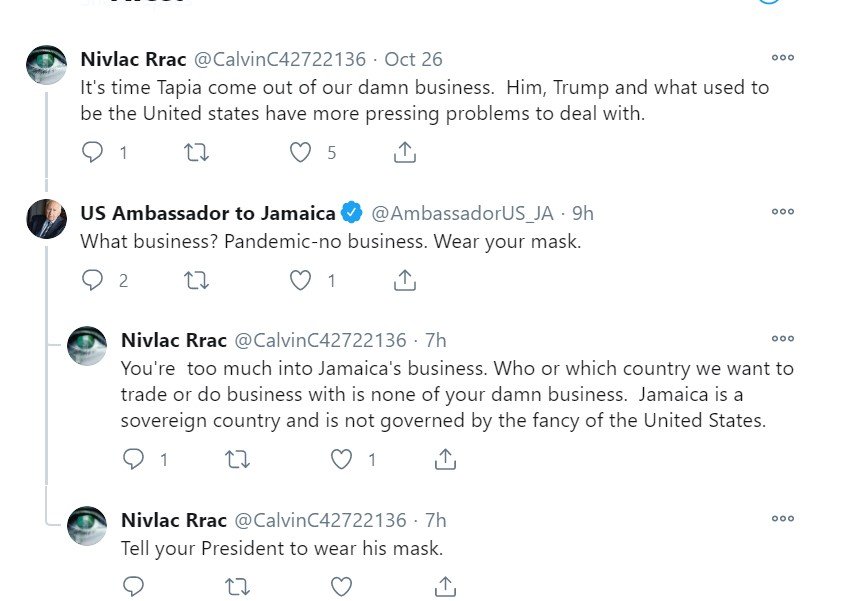 “This man is a little bit too forceful. Its as if we don’t have a choice in what we do. Not liking it,” on Twitter user said.

Tapia responded, noting that he has always maintained that Jamaica is a “sovereign nation”.

“I have always said you are a sovereign nation and your government must do what’s best for the people,” tweeted Tapia.

While the Twitter comments and responses were all quite interesting, one that really raised eyebrows was when one user wrote that if US President Donald Trump is not re-elected, Tapia should be given packing orders.

The Ambassador took this comment with a cooler head, injecting a bit of humour responding, “You all would miss me and have nothing to blog about”.

So, what’s the big deal with 5G anyway?

While 5G is expected to  usher in a new era of interconnectivity between smart objects, the issues of data protection and privacy have come to the forefront.

Tensions have been rising between Washington and Beijing, after the US laid a series of sanctions on Chinese equipment manufacturers, including Huawei and ZTE.

The issue with these companies stem from what has been described as their murky ownership structures that is said to be tied to China’s authoritarian government.

Many bureaucrats and technocrats in Washington have cited cyber security concerns in working with Chinese companies, having previously described Huawei as representing a national security threat and calling it an arm of the Chinese Communist Party’s surveillance state.

Huawei has been accused of corporate espionage with a US Justice Department indictment from 2019 citing
the highly specific demands by the Huawei headquarters in China for information embedded in T-Mobile’s facility in Bellevue, Washington.

The email exchanged is alleged to have shown the immense pressure the company placed on employees to gain access to heavily guarded equipment and trade secrets.

According to the US Justice Department, there was even a incentive programme implemented for employees who provided the most valuable information.

However, Huawei has denied the allegations.

Nonetheless, the US has been encouraging other nations to block Huawei from next-generation 5G networks.

Countries that have blocked Huawei from their 5G infrastructure include Australia and Japan, with the U.K. announcing that it would also ban the company, ordering mobile carriers to follow suit.