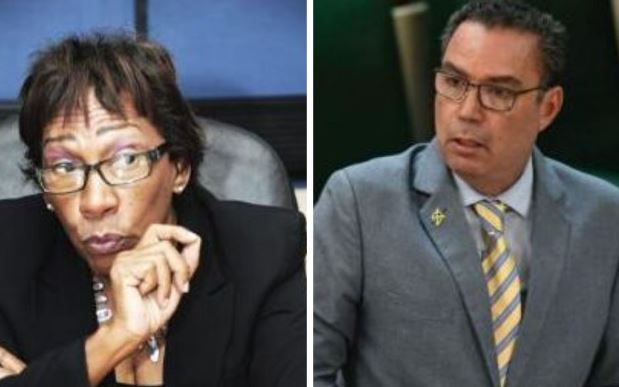 Following a war of words on social media platform, Twitter, Member of Parliament for West Portland Daryl Vaz through his lawyers has written to Queens counsel Valerie Neita Robertson accusing her of defaming his character.

Vaz and Neita, the People’s National Party (PNP) standard-bearer for West Portland, have been engaged in a war of words for weeks, with the back and forth generating plenty of attention online.

However, things got ugly when Neita put out a tweet on July 12, not mentioning Vaz, which the West Portland MP has suggested was directed at him, with aim of defaming his character. 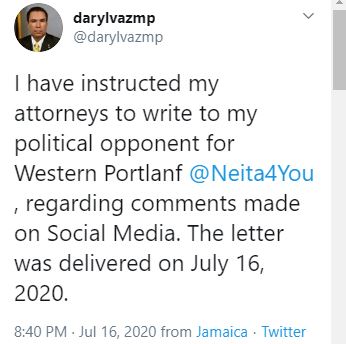 Vaz shared a copy of the letter that his attorney’s Beecher-Bravo Hanson and Associates sent to Neita-Robertson dated July 15 on his Twitter page.

“We have been instructed that through a publication made by your Twitter page @Neita4You you maliciously and intentionally made defamatory statements aimed at our client,” read the document.

“The specific tweet was made on July 12, 2020 at 12:36 p.m. and states as follows: ” My time now… those who are speaking about court…remember I have not been before a court except as Counsel…and I have won some and lost some …but always clean and fair…and their is no statue of limitation for murder or rape so a word to the wise…#pickonyuhsize, ” added the document. 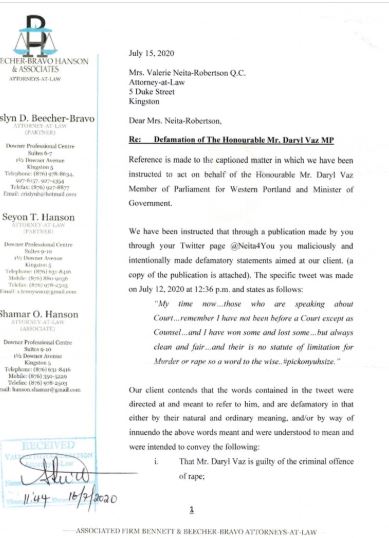 In the document, it notes that given the circumstances, the client is seeking that the tweet be removed and that a formal apology issued in addition to “damages in a sum to be agreed or assessed by the court” paid.

Vaz and Neita Robertson will be going up against each other in the next general election for the west Portland seat.