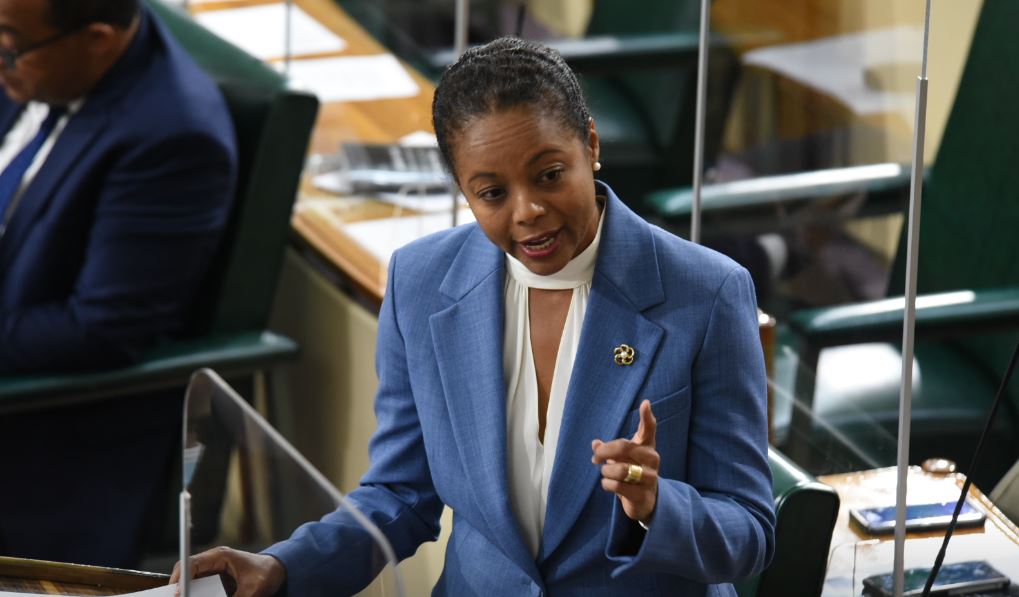 Parliament was on Tuesday (July 6) adjourned for a short five minute period, as the session was disrupted when Member of Parliament (MP) for West Central St James, Marlene Malahoo Forte, fell while returning to her seat.

Malahoo Forte, who was clad in a full blue pants suit, left her seat 1 hour and sixteen minutes into the parliamentary sitting, as MP Olivia Babsy Grange made her presentation to the house.

The West Central St James MP was then seen having a brief word with  Prime Minister Andrew Holness, later returning to her seat as Opposition Spokesperson on Education, Dr Angela Brown Burke, was making her presentation.

However, it appears Malahoo-Forte left her seat for a second time.

This time, however, Malahoo Forte was not successful in making the journey back to her seat, which caused attention to shift from the presentation that was being made by Brown Burke.

While the fall was not captured, Malahoo Forte appears to have fallen head first, as she was seen lying on her stomach, quickly crouching to her knees just steps away from the speaker’s box.

At first it seems, even the Speaker of the House, Marisa Dalrymple-Philibert, wasn’t not aware of what had happened just seconds from her.

Here’s how things went down in parliament just prior to Malahoo Forte’s fall.

“The idea of reviewing the legislation in 18 months, for example, is an important one to make sure that is so as we….”said Brown- Burke, who stopped mid-way through her sentence, appearing startled and her gaze fixed on the area beside the speaker’s box.

The camera is then directed towards the commotion near the speaker’s box, which shows several members gathered round Malahoo Forte.

“Madam Speaker, I want to obey you but I also just don’t want to come across as a crass, uncaring individual and member of this parliament,” said Brown Burke, following which Dalrymple-Philibert decides to adjourn the house.

“Members… ahm… may we suspend the sitting of the house… adjourned  for five minutes. The house is adjourned,” Dalrymple-Philibert is heard saying.

The Den understands that Malahoo Forte was taken to the University Hospital of the West Indies.