It is hard not to notice Richard Currie’s ravishing good looks.

The 43-year-old almost broke the internet when it was announced that he had emerged victorious in the Accompong election and was named Colonel-in-Chief.

Following Currie’s election to the top leadership post late Thursday, Accompong began trending on Jamaican Twitter, and while it was filled with plenty of the usual congratulatory messages the majority of conversations zeroed in on Currie’s good looks.

Some Twitter users were not shy in declaring that they had no idea where Accompong was located but were ready to flee Jamaica to join the sovereign Maroon nation located in St Elizabeth.

“I am moving to Accompong to serve in whatever capacity, Chief Currie would have me raising hands,”said one Twitter user.

“These thirst tweets about the new chief in #Accompong ….I wholly understand,” tweeted another.

Others used the occasion to pitch to the new Colonel asking if the area was accepting any new residents, while making clear their intentions that they were only moving to lust after the new leader.

“He’s a whole snack, is there a way to join the village. He fine,” added another.

Despite the online chatter about Currie’s good looks, he ran a very aggressive campaign utilizing both print and digital media and even snagging an endorsement from reggae heavyweight Buju Banton. 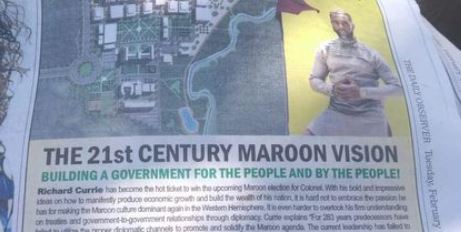 The UTECH graduate campaigned on key issues including protection of the cockpit country protection, infrastructure development and economic independence.

Following his win and recognizing that he had been trending on Twitter, Currie used the platform to thank his new supporters.

“Blessed morning one and all. Thanks to all my followers so far. Your good wishes and sentiments have been humbly received.I am looking forward to the interactions as I share more on who we are as a #Maroon nation, our Vision, Mission and Execution plans. #Accompong,” tweeted Currie.

Currie defeated incumbent Ferron Williams who was vying for a third term. The newcomer secured 681 votes to Williams’ 400 votes . Three others, including Former Colonel Meredith Rowe, got less than 100 votes.