He’s only five-years-old but Rajeiro Lee, the son of dancehall celebrity, Shenseea, already has two endorsement deals under his belt.

However, his latest endorsement deal with soft drink company Chubby has created quite a stir online reigniting the age-old colourism debate.

While the majority of social media users, who saw the announcement on Chubby’s page that Lee was the brand’s latest influencer, welcomed the news, others were clearly not happy with the Trinidad-based company’s pick.

“Y’all wouldn’t have used him if he was darkskin with 4c hair though,” said one Instagram user in reacting to the announcement.

While most commenters did not buy the colourism argument, noting that Lee was likely selected because of his mom’s popularity, others who agreed with the user noted that such biases in Caribbean society were driven by people and not necessarily companies.

“If yall was following up any nappy 4c hair type kid am sure chubby would have considered dem .. but unfortunately this Jamaica where ur parents, skin colour and hair texture has alot to do with how ppl deal with u,” added another Instagram user. 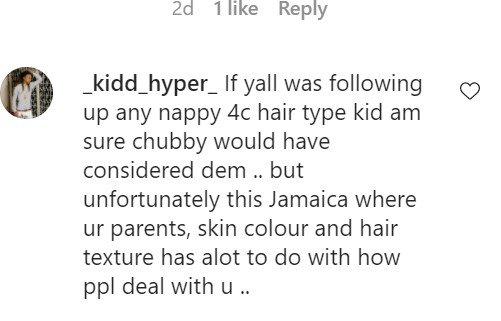 However that was not the end of the argument, as there were others who noted that while there was definitely a need for greater diversity in ads all across the Caribbean, the users comments came across as “badmind” because it was an inappropriate forum, noting that this had nothing to do with Shenseea’s adorable son.

Another social media user in reacting to the news, shared that while she was more alarmed with the child promoting a sugary drink, there is merit to the colourism argument, noting that maybe while not intentional, images subtly affect people, particularly subconsciously and promote the idea that white or lighter is right.

Others while acknowledging the colourism issue, thought it was inappropriate to hurl criticisms at such a young child.

The debate around colourism is raised annually in Jamaica usually around the time of beauty pageant competitions.

Colourism is a type prejudice against people who have a darker skin, holding that preferential treatment should be given to lighter-skinned individuals.