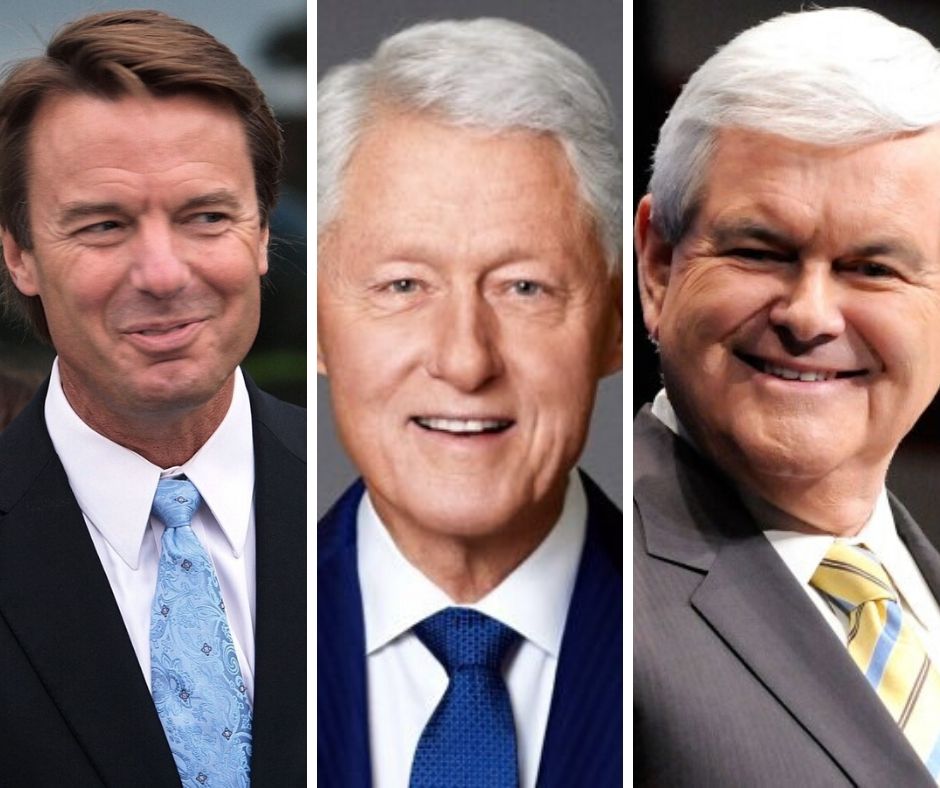 Cheating scandals are not new in the world of politics, but it seems asking about them in light of the ban on scandals (scandal bags) is “inelegant” – at least in Jamaica.

According to the Press Association of Jamaica (PAJ) President, George Davis, the “are you cheating on your wife” question asked by 18 Degrees North journalist Zhara Burton at a press conference on July 17 was inelegant.

Though even Davis agreed that a better variation of the question would have been acceptable and even necessary given the allegations in the public domain, nonetheless the war rages on about the appropriateness of Burton’s question.

While Jamaica may be still rooted in the Victorian era known for its conservative attitudes on sexual matters, our neighbours to the north aren’t averse in sticking it to their politicians, asking in plain language, when similar allegations surface about inelegant behaviours in marriage.

Today The Den is sharing 5 politicians who got caught with their pants down while in office and how US media handle the situation.

How to ruin your chances of securing the Democratic Party’s nomination for the presidency? Cheat on your wife who is terminally ill with cancer.

That’s the story of John Edwards whose run for president went down in flames after his inelegant affair with a campaign aide, who acted as his videographer, came to light.

Interesting to note that one of his political assets was his image of a loving husband standing by his wife’s side, who had been diagnosed with breast cancer; this image had endeared him to female voters.

Who can forget when Edwards in 2007 on the campaign trail said, “there is no one I admire more than my wife” going on to call her his “hero”. 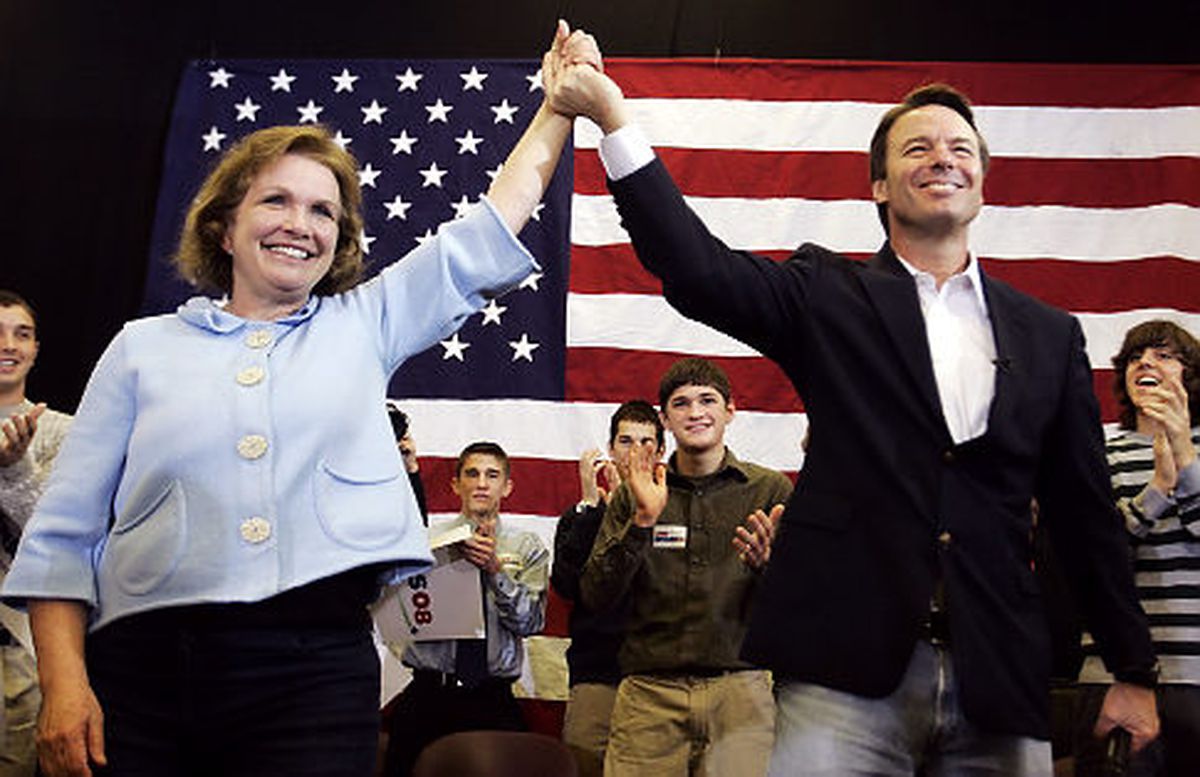 However, the National Enquirer broke the rosy image Americans had in their heads of Edwards when they published a series of reports on his then alleged extramarital affair with campaign worker Rielle Hunter.

Initially, the story was not picked up by mainstream media until weeks later, with Edwards initially denying the allegations.

However, when all the mainstream press came on board things went further downhill. When Edward’s wife, Elizabeth,  learned of the affair she had thought the couple could work through it – after all, John told her it was a one nightstand -she even told media that she had “forgiven” her husband.

Despite getting a second chance with his wife, Edwards still had not ended the affair. Elizabeth later dished the full details of battling with cancer and infidelity in her book  Resilience.

Elizabeth never makes mention of Edwards’ mistress by name, she refers only to her as “a parasitic groupie”.

Elizabeth had intended to file for divorce from John but died on  December 7, 2010, of metastatic breast cancer at age 61.

Edwards has since retired from politics returning to his roots as a lawyer.

He wasn’t thrown out of office because of his indiscretions however it sure put a stain on his near picture-perfect tenure as California’s Governor and ended his 25-year-marriage to Maria Shriver.

Allegation’s of Arnold Schwarzenegger’s sexual misconduct first came to light in 2013 through mainstream media, during his run for governor but his wife came to his defense. Maria in defending her man said he was an “A-plus human being”.

Maria even told a Republican women’s group in Orange County, “You can listen to all the negativity, and you can listen to people who have never met Arnold, or who met him for five seconds 30 years ago.

Or you can listen to me,” as she defended her husband. It is even rumoured that Schwarznegger’s very loyal wife waited until after he ended his seven-year term as governor to move out of the house and file for divorce. Around this time it was discovered that Schwarzenegger had fathered a child with the couple’s longtime housekeeper, Mildred Baena. In 1991 Baena was hired to work as a housekeeper and assistant at Arnold and Maria’s Pacific Palisades estate.

As the story broke Schwarzenegger released a statement fessing up to his infidelity. “I understand and deserve the feelings of anger and disappointment among my friends and family.

There are no excuses and I take full responsibility for the hurt I have caused. I have apologized to Maria, my children and my family. I am truly sorry.” Schwarzenegger said at the time.

While his wife, also a journalist, told US publications it was a “heartbreaking time” for her and requested privacy.

Schwarzenegger has since further opened up about his cheating scandal calling it a ” major screw up” that he regrets deeply. To date, Schwarzenegger and Shriver’s divorce has not been finalized because of their massive $400 million net worth and the fact that they never signed a prenup.

It has got to suck getting called out as a cheater in the digital age, especially when there are receipts that live on forever like racy text messages and pictures.

Congressman Chris Lee quickly said goodbye to politics after new blog Gawker outed his inelegance in looking for someone to cheat with on popular American classified website, Craiglist. Lee back in 2011 attempted to solicit a woman on the website using an ad in which he claimed he was a “39-year-old divorced lobbyist”.

It is alleged that a woman he was talking to on the platform searched his name and discovered he was a married congressman and turned over her email correspondence to the New York news blog Gawker. Shortly afterwards, Gawker published an exposé on the matter.

Lee did not bother wasting time going through a public trial by journalist, he resigned from office the same day and issued an apology.

It is almost unfathomable that Gingrich was himself involved in an affair around the same time he was trying to get a former president impeached on national television for his affair with Monica Lewinsky. According to news publications, Gingrich’s many affairs date back to his congressional campaign in 1974.

Around the time of the campaign, Gingrich was said to be romantically involved with a young volunteer. The prestigious, and certainly elegant, Vanity Fair publication in an article entitled “The Inner Quest of Newt Gingrich”shared an observation from Gingrich’s former campaign scheduler, Dot Crews, who revealed that it was “common knowledge” that Newt was involved with other women during his marriage to his first wife, Jackie.

“Maybe not on the level of John Kennedy. But he had girlfriends –some serious, some trivial,” Crews said at the time. It was widely reported in media that Gingrich had begun discussing divorce proceedings with wife Jackie shortly after she had undergone surgery to treat her uterine cancer, Jackie is said to have thrown him out of the hospital room. 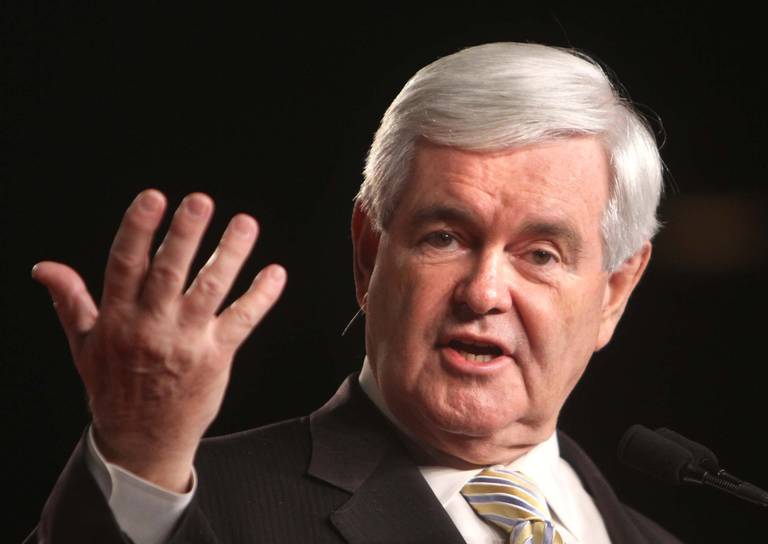 Gingrich has disputed his wife’s account of what happened in the hospital room. Reporters also asked Gingrich about allegations that he had said of his wife that “She’s not young enough or pretty enough to be the wife of the President. And besides, she has cancer”. Gingrich, however, denied making the insensitive comments.

A serial cheater, Gingrich cheated on his first wife with his soon-to-be second wife: Gingrich has been married three times.

Gingrich has not been shy in addressing his infidelity in the public sphere, he even admitted to the Christian Broadcasting Network that he cheated multiple times on two of his former wives placing the blame on his stressful work life.

While his own indiscretions did not factor into his political career, though he was reprimanded for an unrelated ethics violation, he did suffer politically when he went after the president Bill Clinton.

Gingrich was forced to resign after the Republican caucus rebelled against him following the reelection of Clinton.

“I did not have sexual relations with that woman” these are the lines associated with the mother of all cheating scandals. While it may have been Clinton’s private life it almost cost him the presidency when it was discovered that the then  49-year-old President was romantically involved with a 22-year-old White House intern, Monica Lewinsky.

From a semen-stained blue dress to racy tapes the media didn’t hold back in dropping the little intimate details that were none of the public’s business but captured the public’s imagination.  The story broke on January 17, 1998 in the Drudge Report. However, the story was initially to be aired in Newsweek but it was said that editors tried to kill the story by sitting on it and not releasing it.

The story was later picked up in the mainstream press by the Washington Post and soon swirled out of control.

Despite swiftly denying the allegations, that wasn’t enough for the US media which forced Clinton on January 26, 1998, to address the matter head-on at a press conference.Who can forget when President Clinton stood next to his wife and spoke directly into the camera saying,”Now, I have to go back to work on my State of the Union speech. And I worked on it until pretty late last night. But I want to say one thing to the American people.

I want you to listen to me. I’m going to say this again: I did not have sexual relations with that woman, Miss Lewinsky. I never told anybody to lie, not a single time; never. These allegations are false. And I need to go back to work for the American people. Thank you”.

While Clinton went back to work, so did the media and others as they went on to dig into the sexual relationship which took place between Clinton and Lewinsky between 1995-1997. There was a fierce debate in the media about the matter which ultimately led to an investigation charges of perjury and to the impeachment of Bill Clinton.

While later admitting that his relationship with Lewinsky was “not appropriate” Clinton was acquitted on all impeachment charges of perjury and obstruction of justice in a 21-day Senate trial. However, Clinton wasn’t off the hook as he was fined a hefty $90,00 by Judge Susan Webber Wright, his license to practice law was suspended in his home state for five years and he was disbarred from presenting cases in front of the United States Supreme Court.

Interesting to note some political pundits believe the Lewinsky saga actually helped Clinton whose approval ratings rose above 65 per cent and helped the Democratic party pick up seats in the 1998 mid-term elections.