A group colloquially known as the ‘Freedom Fighters’ on Wednesday (August 25) hit the streets of Guyana’s capital to protest against the government’s COVID-19 vaccination policy.

Earlier in August, the government a new policy requiring members of the public to proof vaccination in order to access government agencies.

The new guidelines also mandate that teachers, health care workers, operators of public transportation and private indoor facilities such as casinos and bars be vaccinated against COVID-19. 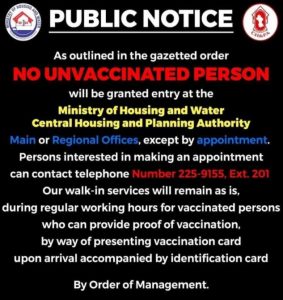 Reports are that at around midday, about 100 protesters congregated in the Square of the Revolution and marched through the streets of Mackenzie and Wismar in Linden, calling for the Peoples Progressive Party (PPP) and the government coalition to overturn the mandate.

Police say that protesters also illegally marched west on Brickdam en route to the Ministry of Education offices where they were subsequently picked up in a bus and eight were arrested.

Working People’s Alliance supporter, Kidackie Amsterdam was among those arrested.

The activists and protestors were joined by the Partnership For National Unity and Alliance For Change (APNU+AFC) Members of Parliament Christopher Jones, Coretta McDonald, and Natasha Singh.

“Our body! Our choice!” and “No to mandatory vaccination,” said protesters.

Leader of the Opposition Joseph Harmon who was in support of the protest has since asked the government for an urgent recourse.

“The nation needs a clear sense of what is happening, what the plan is and to see political, religious and civic leaders working in tandem. The opposition is once again saying that it is ready, willing and able to be engaged and believes that churches and other civil society stakeholders should be given a voice in the process as well,” Harmon said.

According to local media sources protesters were still in custody up to late Wednesday afternoon.