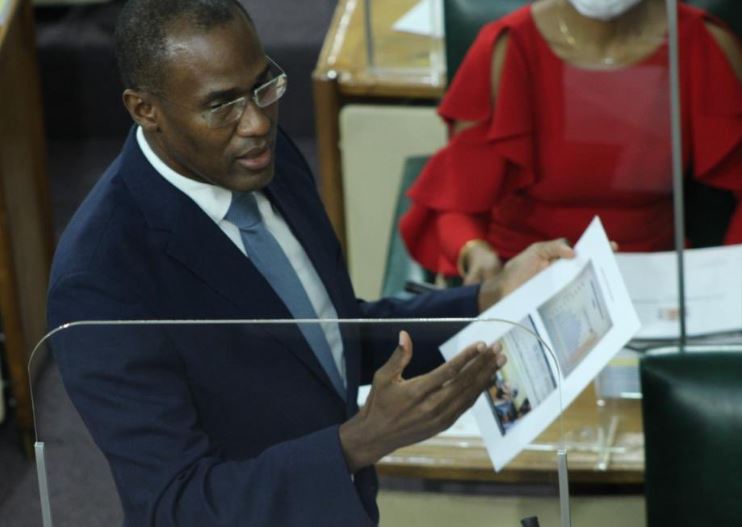 Finance Minister Dr. Nigel Clarke said a Bank of Jamaica (BOJ) dividend payment of $33 billion, to be made in the first week of April, will go towards financing a $60.7-billion recovery programme.

Speaking at the ceremonial opening of Parliament on Thursday (February 18) Clarke announced the Social and Economic Recovery and Vaccines for Jamaica (SERVE) Programme, which will pump funds into the island’s health sector, as well as, will help address infrastructure issues.

According to Clarke the SERVE programme will see the Ministry of Health receiving $10.5 billion which will be directed towards special resources, $6 billion for vaccines and $2 billion directed at regional health authorities.

Under the SERVE programme, $31.1 billion will be made available to an infrastructure program that Clarke anticipates will drive jobs, economic activity, improve productivity and strengthen resilience.

Clarke explained that of the over $30 billion to be allocated to infrastructure improvement, a little over half of that sum ($17 billion) would go towards the South Coast highway improvement project.

“So 17.7 billion for the South Coast Highway, Madam Speaker. $8 billion in a special public investment infrastructure program to improve productivity and increase resilience with the installation of drains, widening and dualization of major thoroughfares, construction of sidewalks etc. And this is captured in the contingency provision for the public investment management system under the allocation to the Ministry of Finance and Public Service. The SERVE Jamaica program will deliver $3.7 billion in secondary roads repairing roads across Jamaica,” said Clarke.

“The SERVE Jamaica program will deliver $1.2 billion for the Montego Bay bypass and half a billion for the construction of new police divisional headquarters in Westmoreland and a new forensic pathology suite- This is on top of what’s already in the budget. Through a special effort, this represents the largest programmed allocation to physical infrastructure on tabling of the budget by the government at any time in the past -it is a historical allocation to physical infrastructure designed to promote jobs and economic recovery. This is pure infrastructure and not mere CapEX ” added Clarke.

The programme is also expected to provide support for the expansion of broadband and Wifi in schools as well as, provide $1 billion in targeted social support.

The Finance Minister used the occasion to share that the dividend payment, that will in part sponsor the SERVE programme, was a result of a major turn around at the central bank in part due to a shift in monetary policy.

He explained that a modernization exercise at the BOJ coupled with a shift away from the preoccupation with the exchange rate and excessive interventions, towards a focus on inflation targeting helped the bank move from recording losses to profits which makes dividend payments like this one possible.