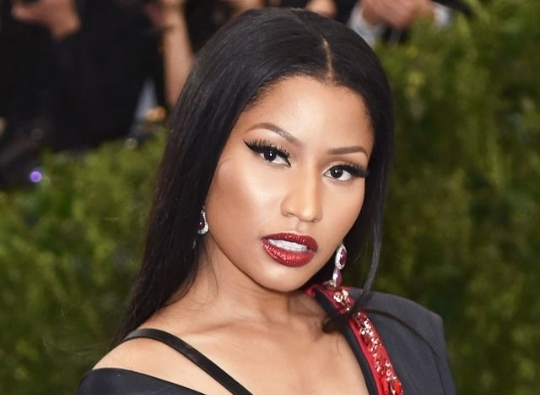 American rapper Nicki Minaj says that she has tested positive for COVID-19.

Minaj made the revelation on Twitter on Monday (September 13).

The ‘Superbass’ rapper’s tweet came amid speculations that she will not be attending the 2021 Met Gala in New York City.

“Love you babe. I was prepping for vmas then I shot a video and guess who got COVID? ,” she said in response to a fan.

“Do you know what it is not to be able to kiss or hold your tiny baby for a week? A baby who is only used to his mama? ,” She questioned.

“Get vaccinated, Drake had told me he got COVID w|the vaccine tho so chile,” added the rapper.

Minaj’s tweet went viral within minutes after fans all over Twitter expressed their disappointment with the news.

Some fans were even questioning whether or not the star was being honest. 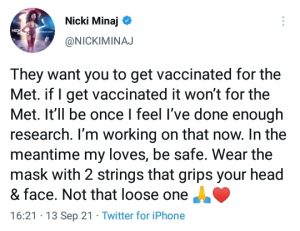 Nonetheless, the 38-year-old rapper had time, because she was on a roll in responding to fans on the platform accusing her of lying.

One fan tweeted the rapper asking why she is not vaccinated against COVID-19, and Minja’s response was very interesting.

“My cousin in Trinidad won’t get the vaccine cuz his friend got it and became impotent. His testicles became swollen. His friend was weeks away from getting married, now the girl called off the wedding. So just pray on it and make sure you’re comfortable with your decision, not bullied,” tweeted the rapper. 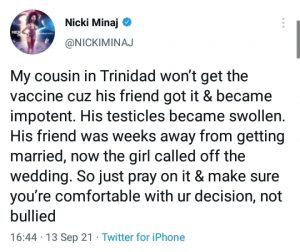 Meghan McCain jumped in the conversation, seemingly telling Minaj to get off social media.

Other social media users also voiced their opinions on the eyebrow-raising tweet from Minaj.

“Sorry but Nicki coulda kept this part to herself like what was the reason. why did we need to know all that about her cousin,” one user said.

“She can tweet what she wants who the hell are y’all seasoned and non-seasoned a**es,” added another.

Fans of the star were engaged in a very long thread about the viral tweet.

“I get her point of not being bullied into getting it. My client has had heart problems for a week after getting it,” one fan said.