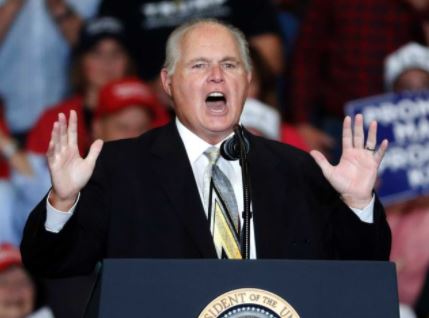 He was 70-years-old and died after a battle with lung cancer.

Limbaugh’s wife, Kathryn, announced the death on his radio show on Wednesday (February 17).

The radio host who is credited with revolutionizing right-wing radio told his listeners in Jan 2020 that he had been diagnosed with advanced lung cancer but had remained on air and even told his audience that he was hopeful that he would beat the disease.

“The Rush Limbaugh Show,” which Limbaugh hosted for over three decades, was popular among Americans who identified as conservatives, and was often a platform used to advance conservative ideas.

Limbaugh was close friends with former US President Donald Trump, who awarded him the Presidential Medal of Freedom at a State of the Union address.

During Trump’s first impeachment trial, Limbaugh used his platform to support him, advocating for him daily, telling listeners that Trump’s only offense was being “too successful.”

“He’s being impeached because his successes threaten great damage to the Democrat Party,” Limbaugh said.

According to Forbes, the Missouri native was the nation’s second-highest paid radio personality, having a net worth estimated at $600 million.