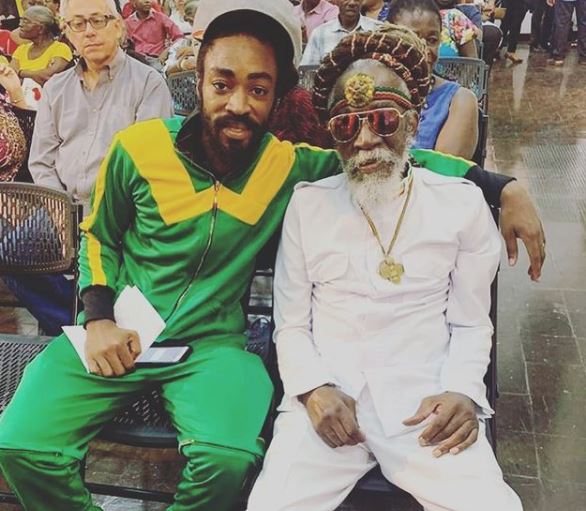 Just hours prior to the passing of reggae icon Bunny Wailer, his son, Abijah Asadenaki Livingston, took to social media to share that he had cut ties with Maxine Stowe.

Livingston described Stowe as his father’s “most recent manager”, who he has been suspicious of since the disappearance of Jean Watt.

According to Livingston, he became suspicious of Stowe on the day his father’s wife went missing noting that it was Stowe who left the gate open that allowed Watt to wonder off the compound.

“We are troubled by Maxine’s actions on the day Sis Jean disappeared. Maxine left the house without informing my younger sisters who live at the house with my father and Sis Jean that she was heading out, in her haste to leave she did not ensure that the gate was properly locked. Due to Sis Jean’s mental condition, it is a known fact that the gate to our family yard must be kept locked at all times,” said  Livingston. 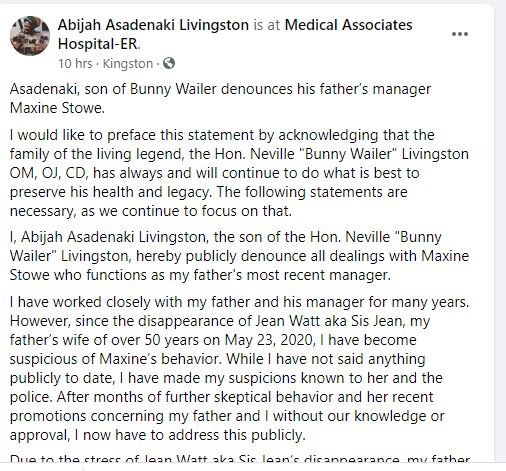 He went on to add that  his level of suspicion became heightened when Stowe allegedly told the press that Watt and his father were never legally married.

” The fact that in Maxine’s very first statement to the media following Sister Jean’s disappearance her comments were that Jean Watt was never legally married or had any children for my father. This information was irrelevant as Sis Jean and my father have been together for over 50 years. The fact that Maxine made these comments raised concerns for his children, who were actually raised by Sis Jean,” added Livingston.

Conducting business without the family’s consent

According to Livingston, the relationship between himself and his father’s manager further soured upon learning that she had been conducting business on his father’s behalf without consulting the family.

Livingston told fans while there had always been plans to re release his father’s catalogue, those plans had been halted when his father was admitted into hospital in  July 2020.

“This is something my father, Maxine and I have discussed for years that somehow was never finalized while my father was still functioning. According to this article, now, his entire catalogue is suddenly ready for Spotify, t-shirts branding “The Wailers” imagery and a host of other plans that I nor my father played any part in making,” said Livingston

“This decision also begs the questions: Why re-launch Bunny Wailer’s solo catalogue and focus the branding around The Wailers? And why am I only privy to this by a published article? Were contacts made with the estates of Bob Marley or Peter Tosh,” questioned Livingston.

Livingston also shared with his following that he had worked very closely with his father and is the e execution of  his trust.

Born Neville O’Riley Livingston, on April  10, 1947, Bunny passed away earlier today at hospital where he was receiving treatment.