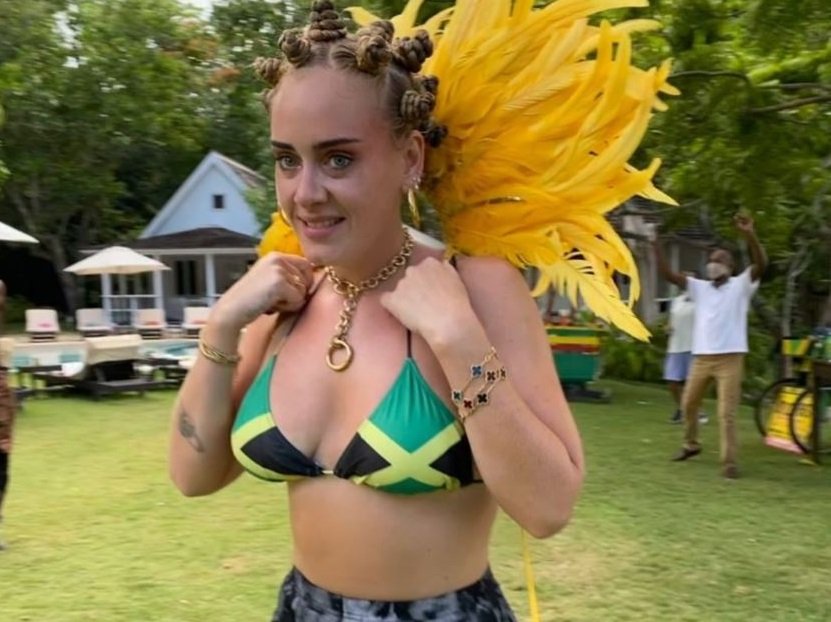 English singer-songwriter Adele became embroiled in a social media firestorm on Sunday (August 30) after she shared a photo of herself wearing a Jamaican-flag inspired bikini top, while rocking bantu knots also known locally as ‘chiney bumps’.

“Happy what would be Notting Hill Carnival my beloved London,” said Adele in her caption for the now controversial photo which sought to celebrate the annual carnival event which was pushed online due to the COVID-19 pandemic.

The photo went viral with many accusing the “Hello” singer of cultural appropriation.

Soon after the memes, reggae and dancehall style renditions of Adele’s most popular songs started making landfall on Twitter, with the cancel Adele movement not far behind.

However,not everyone was quick to cancel Adele or found the cultural appropriation label fitting.

Many on Jamaican Twitter found Adele’s dress and hairstyle to be a non-issue, with some accusing black-Americans of being too sensitive.

“Dear Black Americans, you’re not the spokesperson for the entire Black Race. Stop disgracing yourselves. Jamaicans are cool with it, Africans aren’t vexing, so what’s your excuse? ” asked one Twitter user.

“Dear Black Americans, y’all are not the the spokesmen for the black race, ethnically, Adele outfit and hairstyle is none of your business…pay attention to the [stuff] y’all got going on in the US #Adele Flag of Jamaica,” added another Twitter user.

Ariana Grande, Kim Kardashian, and Katy Perry are just a few of the celebs accused of using other cultures to gain clout.