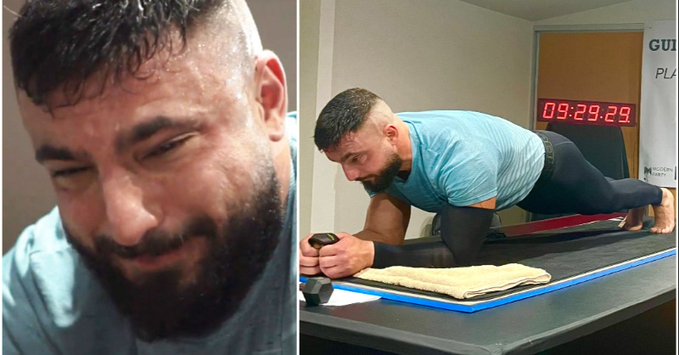 28-year-old Australian Daniel Scali broke the Guinness world record for the longest time in the abdominal plank position (male) with a staggering time of 9 hours 30 minutes and 1 second.

He held the plank position longer than the average person sleeps per night.

Scali who suffers from Complex Regional Pain Syndrome (CRPS) was able to pull off this impressive performance in Adelaide, Australia, leaving his left arm in almost constant pain.

“When I was 12 years old, I fell off my trampoline causing a severe break in my left arm and as a result, I live with a condition called CRPS (complex regional pain syndrome),” he explained.

He smashed the previous record of 8 hours 15 minutes and 15 seconds, set by ex-marine George Hood from the United States, who was then 62-years-old.

During the attempt, Scali wore a compression band on his left arm to try and alleviate the worst of the pain, but his condition made this attempt an even tougher challenge than it already was.

“Obviously putting constant pressure on my elbow and forearm, up to my shoulder did give me quite a bit of grief at the start,” he added.

In order to prepare himself for the ordeal of this record attempt, Scali knew he needed to be in top-notch physical condition.

The new record holder disciplined himself with a formula of using exercise and planking specifically as a way to train himself to his resilience to chronic pain.

“I incorporated a few gym activities, my own personal gym use, and doing tons of push-ups and sit-ups to get my body conditioned for the plank.” he continued.

Scali’s passion for fitness that lead him to break this knackering record.

The Australian also used the opportunity to raise awareness about persistent pain and help other people find effective ways to help manage it.

“I wanted to prove to people that no matter what the circumstances you go through, no matter what pain barriers you have- if you put your mind to it and you believe you can do it, you can achieve it.”