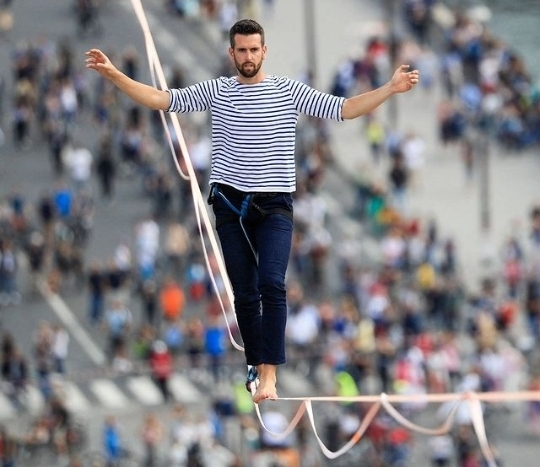 Frenchman walks a stunning 600 meters on slackline across the sky

Frenchman Nathan Paulinm crossed the river seine in Paris this weekend, walking a stunning 600 meters from the Eiffel Tower to the Chaillot Theatre on the other side of the seine.

A barefooted Paulin in the breathtaking feat treated cheering crowds to a thrilling walk across the skies for thirty minutes.

According to Reuters, Paulin’s slackline was suspended 70 meters above the ground.

A safety strap was attached to the 27-year-old as he progressed on the fishnet like rope beneath his weight. 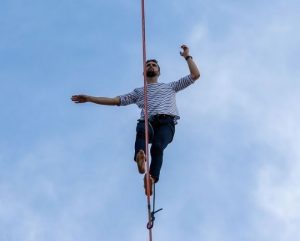 Paulin stopped to rest at different intervals by sitting or lying on the line during his performance.

The braveheart says his motivation comes from his love and appreciation for Heritage Day.

“Mainly to do something beautiful and to share it and also to bring a new perspective on heritage, it is to make heritage come alive,” he said.

France’s annual Heritage Day celebrates the historic buildings and monuments that are usually closed to the public.

“It wasn’t easy walking 600 metres, concentrating, with everything around, the pressure but it was still beautiful,” he added.

The tightrope walker also shared that there is a long process involved in obtaining the necessary authorisations to walk the line. 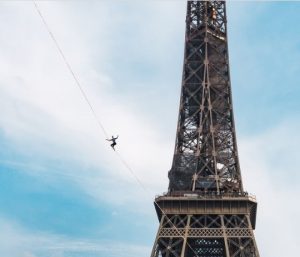 However, this is nothing new for Paulin, he first attempted the feat from the Eiffel Tower in December 2017 for a televised charity fundraiser.

He also set the world record for the longest urban highline walk with a safety harness by a man in his first attempt.

Paulin began his journey with slacklining in 2011 and says it has helped him with intense concentration and mastery over his body.

Slacklining is similar to tightrope walking but involves a wire that has not been stretched taut, but rather adjust to the movement of the walker.