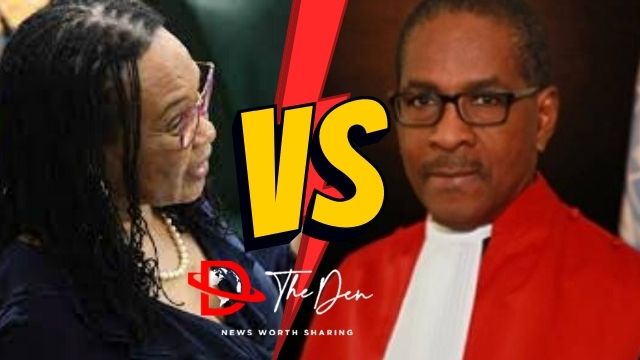 Shadow Minister of Justice and Information, Senator Donna Scott Mottley, has rubbished a claim advanced by Justice Seymour Panton which allocates equal blame to both sides of the political divide for not establishing the Caribbean Court of Justice (CCJ) as Jamaica’s final appellate court.

While speaking at the 60th anniversary of the Court of Appeal on Wednesday retired Justice Seymour Panton slammed parliamentarians for not moving away from the Privy Council toward the CCJ.

However, Mottley has fired back, styling Panton’s comments as unfair.

Mottley in a release on Friday (August 5) reminded Panton that it was during the previous People’s National Party (PNP) administration, which spanned 2011 to 2015, that the then Minister of Justice, Mark Golding, had presented three bills aimed at replacing the Privy Council with the CCJ to the parliament.

However, Mottley pointed out that bill didn’t receive a single vote of support from the then opposition senators.

“It will be recalled that no support was forthcoming because the present Prime Minister, then Leader of the Opposition, required the eight Opposition Senators to pre-sign undated letters of resignation to prevent Parliamentary support for the CCJ,” said Mottley

“His conduct was later deemed by the Supreme Court and Court of Appeal to be unconstitutional, and the letters null and void and of no legal effect,” added Mottley.

According to Mottley, following the change of administration in February 2016, the current administration has not made any attempt to advance the process, despite several urgings and a pre-election promise by them of a referendum.

Mottley stressed that her party staunchly rejected any assertion that it bears equal responsibility with the current-government for the continued delay in leaving the privy council and establishing the CCJ.

“It is important to tag the responsibility where it lies if progress is to be resumed and critical decisions are taken. The fact is the Prime Minister of Jamaica, Most Hon. Andrew Holness does not support the CCJ. His Party and himself seem to believe superior justice flows from the London Privy Council instead of the CCJ,” said Mottley.

“The PNP endorses the timely statement of the former President of the Court of Appeal and repudiates the continuing belittlement of the CCJ by members of the current administration,”added Mottley.