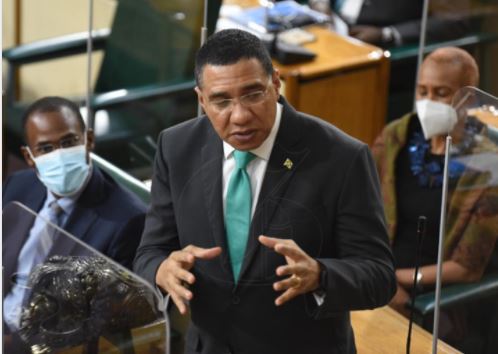 More spending would throw Jamaica into a debt trap – Holness

During his contribution to the budget debate on Thursday (March 17) Prime Minister Andrew Holness said that the country’s debt was “already too high” noting that any additional spending could lead Jamaica back into a debt trap.

Holness was responding to a suggestion made by the opposition spokesman on finance, Julian Robinson, who encouraged the government to spend more to stimulate the economy.

The Prime Minister explained that if the country had the revenues and the debt to GDP ratio was low, the government would go deeper into a counter cyclical spending program to further stimulate the economy.

However, Holness said because of Jamaica’s financial situation it would not be feasible to spend more, adding that any additional spending would be the start of a vicious debt spiral.

“To be clear, we have suspended our fiscal targets and adjusted our primary surplus to allow for the expenditure of the $60 billion under the Social and Economic Recovery and Vaccine (SERVE Jamaica) Programme this however is the maximum we can do without throwing us back into a debt trap. Especially when our debt is already too high to begin with,” said Holness

According to Holness, what is being proposed by the opposition is that the country borrow more.

Holness said that more spending would be detrimental, touting that the way forward was ensuring that Jamaicans got vaccinated.

“This is precisely how a vicious debt spiral begins, leading to an increase in our debt again to unsustainable levels, undermining the credibility of government’s fiscal policy, putting our international credit ratings at risk, and ultimate threatening the prospects of recovery that every Jamaican household is anticipating. We can return to growth without unsustainably increasing our borrowing . We must get our people vaccinated, so we can rapidly return our economy to full operations.

According to Holness, Jamaica is maintaining its macro economic stability and debt sustainability in the face of one of the most severe economic crisis, something which the Prime Minister notes only a few countries have manage to do.

” Our current account deficit is estimated to be flat at 1.7% of GDP for 2020/ 2021 versus 1.6% of GDP in 2019/ 2020. What this means is that even though we lost 2.5 billion in foreign exchange earnings for our tourism export…there was only a marginal increase in the difference between our total inflows from exports and other earnings and what we spend on imports and other earnings. This shows an economy that is developing the ability to absorb shocks,” said Holness.

“Our net international reserves have been maintained at a robust level of over three billion dollars, the amount of public debt remained flat over the years, despite the massive fallout in government revenue and increase in government expenditure. Madam Speaker, Jamaica is among only a few countries that have been able to achieve this. Governments globally issued a record $60.3 trillion in debt in 2020 and are expected to borrow another 12.6 trillion US dollars this year,” added Holness.