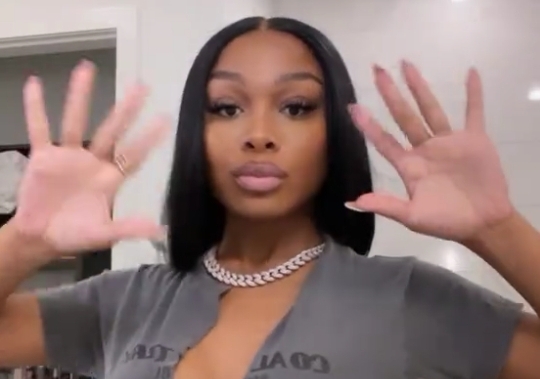 Cheaves and her entourage were to leave two days earlier but were detained after firearms and ammunition were found in their possession.

Cheaves and Gregory Wright who is a member of her entourage appeared in the Western Regional Gun Court in St. James.

The duo pleaded guilty to illegal possession of firearms and ammunition.

“They were fined this morning in the Regional Western Court for the illegal procession of firearm and ammunition,” said Micheal Hemmings who represents Wright.

“They have paid the fines, so they are free to go,” added Hemmings.

Cheaves and Wright were arrested and charged on Monday (September 27) with illegal possession of firearms and ammunition after two black 9mm guns and 15 bullets were found in their possession.

A newly 24-year-old Cheaves celebrated her birthday over the weekend and was attempting to board a private jet off the island on Monday when the firearms and bullets were found.

Cheaves took to her Instagram story on Wednesday (September 29) to share with her 5.9 million followers that she has learned her lesson.

“It was an honest mistake and believe me when I say I learned my lesson,” she said.

She also used the opportunity to thank her followers for their support.

“Thank you for all your concerns. We are good and out of court,” she added.

Nevertheless, Cheaves maybe planning her next trip back to Jamaica after sharing that her birthday celebration on the island this past weekend was the best birthday ever.

“I had a ball out here , best birthday ever,” she said. 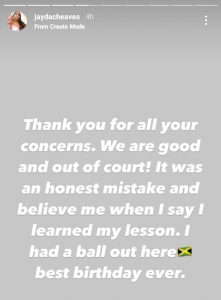 Published in Celebrity and Jamaica News