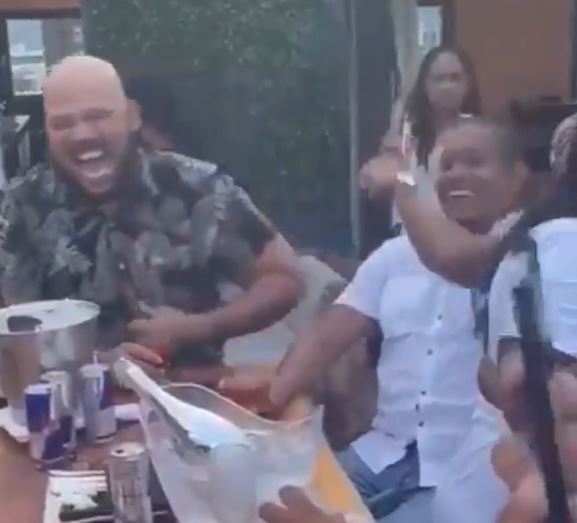 The COVID-19 guidelines are simple: Stay home. Avoid seeing anyone outside of your household. If you have to go out, wear a mask and stay 6 feet apart.

As Jamaica battles a third wave of COVID-19 infections, it is a message that has grown louder; with the public often on the receiving end of constant scolding surrounding not adhering to the rules.

However, it turns out that it is not just the Jamaican public who aren’t adhering.

At least two prominent leaders, centrally involved in the country’s coronavirus response, have been caught breaking the rules too.

Agriculture Minister Floyd Green and Jamaica Labour Party (JLP) Councillor for the Mona division  Andrew Bellamy caught the ire of the nation after a video of them surfaced on Tuesday (September 14)  breaching COVID-19 protocols.

The Den understands the scandalous video, in which Green and Bellamy were seen gathering in breach of COVID-19 protocols, was derived from a civil servant’s birthday party which took place a day prior.

Some noted while the breach could be forgiven as a slip, others said the toast made during the video seemed to be poking fun at the country’s citizens.

While others were particularly alarmed with Green’s behaviour, seeing the political newcomer as one with better judgement.

Green and the political fallout from birthday party breach

“Floyd” has been referenced in hundreds of Tweets, the majority predominately negative.

“Recall the statement made by PJ…politicians do what politicians do best…these younger ones just do it more brazen and fool hardy than the others…Jamaica been in a state of decline since independence…Floyd and friends milking it…they all taking turns on Jamaica,” said one Twitter user.

“Floyd went outside and made a fun of who anju told to stay inside,” tweeted another.