Queenie’s new bae, 20-something-year-old ‘Dewey’, popped the question on Wednesday (November 12), with her Instagram audience present for the occasion which was recorded live.

The social media influencer, who recently launched a music career and has been a staple of attention since she burst onto the scene in 2014 with her funny videos, has never been shy about the fact that she wanted to be in a stable relationship.

And now she has gotten her wish.

“I’m overjoyed, overwhelmed me nuh know what to do with myself Dewey seh him want to marry me for my 51st birthday,” said a beaming Queenie.

“She give me dat special feeling deh, you know,” responded Dewey, who was seen rocking a cute afo-puff hair style.

Instagram users watched as ‘Dewey’ and ‘ Queenie’ got mushy in front of the camera sharing small kisses, known colloquially as chups, as the overjoyed couple celebrated the monumentous occasion. 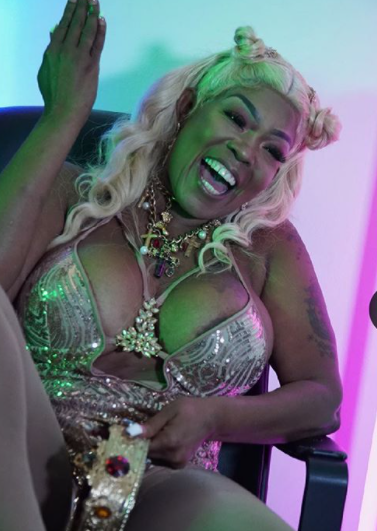 Queenie was even seen trembling as Dewey placed his token of love on to her finger.

“Mi glad you see God,” added Queenie who hugged Dewey as Ella Mai’s ‘Boo’d Up’ played in the background.

While it is unclear how long Queenie and Dewey have been dating, the social media influencer made her love for him publicly known in September 2020, when she posted a pic of him on her IG.

Though several followers of Queenie were not so kind to him during his major debut on her page, trashing him for being overly skinny, it seems fans have warmed up to Dewey; with many wishing the couple all the best on their pending marriage.

Queenie has never been shy about her romantic relationships, having been very vocal about the heartbreak she experienced following her split from her ex known only as ‘ Ziggy’